A place to discuss and exchange ideas on all types of control surfaces for PowerSDR and Thetis.
Post Reply
4 posts • Page 1 of 1

Due to QC issues, I'm using a replacement DJContriol Compact MIDI controller. The first controller had an LED failure where it would no longer illuminate. The switch/LED was assigned to CTUN. The corresponding switch function continued to work fine.

After an Amazon exchange a few months ago, the CTUN LED on the replacement controller began to slowly dim over time. It's also assigned to the CTUN function and is active all the time. None of the other switch function LEDs are illuminated 24/7 like CTUN.

The images below show the DJC-Compact's internal PC board. Disassembly and board removal was easy and only took a few minutes.

The first image shows a red circle highlighting the defective LED. Before removal, I verified that the series current limiting resistor had not changed in value; it measured identical to the other current-limiting resistors.

The LED was swapped with an alternate on the board that's only pulsed periodically. It's a temporary fix until some industrial-grade LEDs are received from Mouser. The blue LEDs are standard 1206 SMD/SMT. I'll report back with the Mouser P/N after replacing all affected LEDs.

I'm not sure why these LEDs are failing apart from manufacturing defects. They're operating well within a normal forward current range. 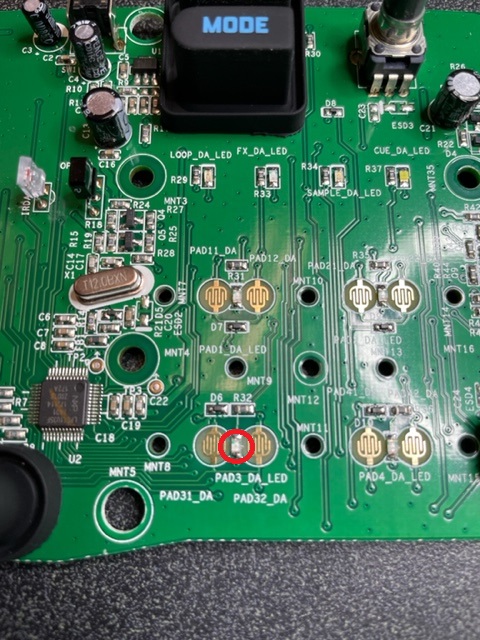 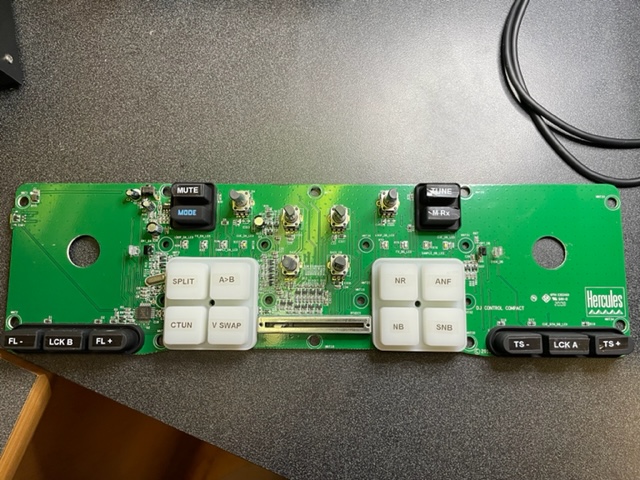 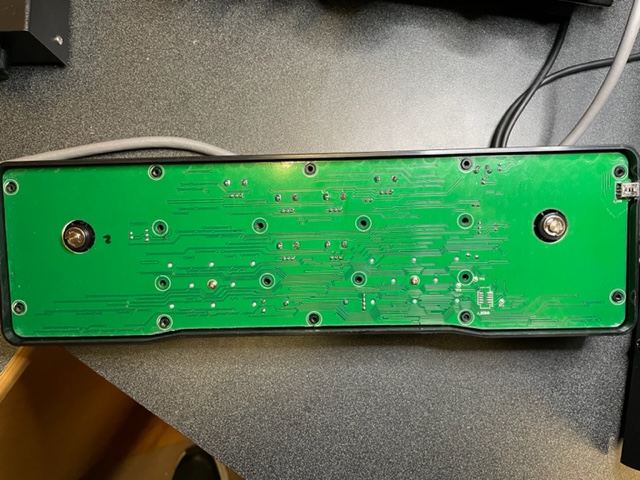 I ordered three different types of blue SMD LEDs, each with a different luminous intensity (mcd) spec. I tried 72, 100 and 120 mcd. True to specs, the light output does change relative to the mcd value. The 120 mcd LED produces a blue light intensity closest to the original. It's a Dialight 598-8291-107F.

You may not experience the same LED failure with your DJControl Compact MIDI controller. But if you do, the Dialight brand is a good choice; they're highly regarded in the electronics industry.

Update: so far, so good with the new Dialight LEDs. I recently had a similar experience with a Yaesu FT-7250DR 2m/70cm transceiver. Yaesu uses ultra-bright white LEDs for LCD and panel button back-lighting. The rig stays on 24/7 and it's mostly used for System Fusion contacts.

After three years, the LEDs have gradually dimmed to the point of a near total loss of luminance. Apparently, this is a common occurrence with ultra-bright LEDs. For those interested in the root cause, I've linked to a reposted paper that was originally published in Electronic Products Magazine: