This video covers all the steps for setting up the transmit audio in OpenHPSDR mRX PS. It addresses everything the first video covered and also includes using the CFC meter, the CFC Comp meter, and the adjustment of the ALC Max Gain setting with COMP and CESSB. These items were not present in the first video as those features were not implemented at the time it was made.

Thanks Rob, thats my project for the weekend
Top

I'd make the following recommendations:

1. Substantially change the leveler max. gain higher, to 15dB, and the leveler decay time shorter, to 100mS. If you increase that max. gain setting it eliminates the "pumping" effect you reported and, with the 100mS setting, greatly improves density.

Selecting these frequencies is probably the most important thing you can possibly do if you don't have great raw material, i.e. if you don't have a melodious radio voice (and yours is quite melodious, Rob--seriously, you should do voice work

, spend some time finding those specific frequencies that, when removed, improve the sound of your voice, and then set them up on the pre-EQ and drop those levels as far down as you can. Obviously you probably only want to do this with about half of your available bands, maximum, as you need some control over the remaining frequency content that you do want to keep. Think about using every other band for this.

If you are doing more than just flattening spectrum, obviously the choices you make are quite subjective.

Just by way of example, here is what I have right now. Certainly yours would be different. 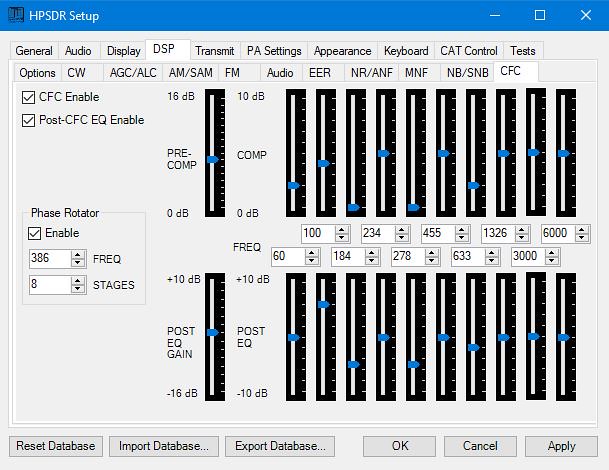 3. Never use COMP or CESSB (CESSB is automatically off if COMP is off). IMHO they sound terrible. The other downside of using CESSB is that it forces you to use the linear phase filters, otherwise it won't work properly. If you are not using the low latency filters you take a huge hit in transmit latency.

4. Instead of using COMP or CESSB for additional compression, use the ALC instead. Using the post-EQ gain control, allow the ALC COMP meter to reach up as high as 7-9dB on SSB, and perhaps 3-4dB on AM (or maybe even less on AM). Because the ALC uses a look-ahead, soft limiting algorithm, it acts as a second compressor-limiter on the audio, and it sounds substantially better than COMP. COMP is probably well on its way to the dustbin of history, sort of the same way NR2 has pretty much replaced NR.

I have not explored the ALC "max gain" setting yet, and I continue to use 0dB for this for now.

Great suggestions Scott! I absolutely agree that a Leveler setting higher than the default "5" will produce a more optimal result with the CFC. It adds some soft limiting at the front end and makes the CFC much more responsive. I'm glad you mentioned that as the video did not hit that point. I haven't yet tried your frequency point "centering" suggestion but it makes perfect sense. I think you and I generally try to produce audio that sounds natural and clean on the other end. From many discussions with users over the past couple of years there are those who like a lot of "edge" and accompanying loudness in their audio to break through pileups, and the COMP option along with the CESSB option is ideal for them. As you said, transmit audio is definitely a very big subjective zone.

Tony, from front-to-back it only takes a few minutes to create a TX profile, however, then the "inner nerd" usually clicks in and you might spend hours experimenting with different settings. It's great fun to play around with all the settings and it's possible to create profiles that sound exactly like you want them to. Scott has offered some excellent ideas to try out so that should get you on your way. I sometimes have more than 20 transmit profiles in my list and have to occasionally spend time deleting the ones I don't use. Fortunately, transmit profile madness is not a serious affliction!

The ANAN rigs running OpenHPSDR mRX PS can do lots of things really well but with the AM mode the performance of the transmit audio chain goes right through the roof, especially now with the CFC Audio Tools. As I was typing this I was also in a 75 meter AM QSO and recording several other stations with my other station computer using an SDRPlay receiver and Adobe Audition. A brief segment of that recording is at the link below. The first station in the recording is running a broadcast quality homebrew Class E rig with a remote setup, the next station is my ANAN-200D, and the third station is running one of the ANAN-100 rigs, also with a remote setup. The ANAN rigs can produce an AM signal that is broadcast quality (or very close) without generating splatter up and down the band. I'd say the developers have done a magnificent job with the implementation of the transmit audio components in the CFC versions!

Lots of transmit profiles to cover every occasion!

Thanks Rob , yes it did not take long to get it set up. I guess I'm in the "natural audio" camp but the signal does have a nice bit of punch too on SSB . A kind gentleman in EA yesterday on 6m (my only band) told me I was S7 but sounded S9 so I'm happy if it stays like that . Just need to get the headphone mixer that Scott suggested in the other thread and I'll be good to go i think.
Top

Hi Rob, I made a mic recording using audacity and although it sounds fine on PC playback,when I use powersdr wav for replay its sounds way overdriven. Same thing happens if I use "quick record" on wav file controls . Any idea what I am missing ?
Top

If it sounds fine when playing it back on the PC then it most likely is the TX Gain setting in the "Wav File Controls" form. I can't recall what the default setting is but I do recall that I had to reduce the gain significantly to get the audio level close to the level of my audio chain. As the screenshot indicates, I ended up with a TX Gain setting of -4 dB and that works fine for me with pre-recorded wav files as well as Quick Play files. I adjusted it while listening with MON enabled and while watching the TX Meter for deflection that matched my audio chain.

"One thing I am certain of is that there is too much certainty in the world."
Top

Hi Rob , tried that all the way down to -49 and no difference . Guess I'm missing something fundamental.

From your screenshot, it looks like you may be playing back an audio wav file while in receive mode. The PowerSDR mRx PS audio wav playback and quick play functions are only intended to play audio files while in transmit mode. My screen looks similar to yours if I play an audio file through the receiver, and it does sound distorted and overdriven as well. Try playing it back while transmitting and use the MON function to hear how it sounds. Start out with the TX Gain set to 0dB but depending on the audio level of the recording you will most likely have to adjust it up or down to get the level right.

Here is a small portion of my source audio recording (about 9 seconds) if you want to download it and try it out. The file is 3 meg in size and is a 32-bit stereo wav recording.

Let me know how that works out.

Rob W1AEX
"One thing I am certain of is that there is too much certainty in the world."
Top

Thanks Rob , you are absolutely right . Once in TX mode it all works , just had to make sure PTT was overriding VAC as I use VAC to feed mic in usually. Thanks for the high quality audio file, very useful for test purposes.
Top

Glad you have it sorted out Tony. Yes, when I have not used the playback feature for awhile I nearly always forget to set the PTT override for VAC. It provokes one of those hmmmmm.... moments but I suppose it's good for the brain!

Rob W1AEX
"One thing I am certain of is that there is too much certainty in the world."
Top

Being new to most of this i am about ask a stupid question. Am I correct in thinking this this procedure should be performed for AM and SSB?

Is there a place that I have to save it to or does it just configure itself when you switch to the mode.

Everything revolves around the idea of Transmit Profiles.

Make all the changes that you desire. Then save them as a transmit profile. Go to Setup > Transmit and press the save button (the rest of the saving process should be obvious after that).

I strongly recommend disabling the two "Auto Save" options on that setup screen. This will prevent you from accidentally saving a change. Such "accidental" saves can cause endless confusion. Make it so that you have to explicitly go to that setup screen to save a change, or a new profile.

You can have as many profiles as you like. Generally people will start with one general profile, then make copies of that profile at different transmit passband widths, and/or with slight changes to get the audio qualities they like for SSB or AM. Then it is quite easy to select the profile you want from the main console interface as you switch modes, switch gears between say DX and rag chew, or move to different band conditions, etc.