Just thought I might toss this out here as i`m not sure how much is still being done with this.

This is on a Homebrew controller running John`s V2.0.0.0-rc7 currently
While I don`t use this often, it is used on a couple of different radios (7K and two different 10E`s)
Obviously there is no way via the GUI to set the freq calibration point, These vary considerably 60-70 Hz between the various hardware
I know one can use the RIT/XIT and have the display show correctly, but it`s just a pain and probably Me being OCD about it as i`m fanatical about being dead on freq.....Yea I probably need help..

It`s been a long time since i`ve delved into any code but my question is, Is there any "edit" than can be done in the code to change this...I have no issue burning different SD cards for each radio Because typically once it is on a specific one it stays there for while......The 7000 is close but the two 10E`s are significantly different.

I realize this may not be the answer you want, but you might also consider buying a GPS disciplined 10MHz reference oscillator. Leo Bodnar makes a reasonably priced one. The 7000 will automatically use the signal. The 10E's will have to have their internal jumpers configured to use it.

Once you have one of these 10MHz references you never have to worry about it again.
Top

w-u-2-o wrote:I realize this may not be the answer you want, but you might also consider buying a GPS disciplined 10MHz reference oscillator. Leo Bodnar makes a reasonably priced one. The 7000 will automatically use the signal. The 10E's will have to have their internal jumpers configured to use it.

Once you have one of these 10MHz references you never have to worry about it again.

Scott
While I understand that is a option it is yet more "stuff" to have to deal with especially given the sometimes portable battery operated environments the 10E`s are subject to....I don`t even run a GPSDO on the 7000 at home...honestly no need to..it has not varied more than a couple of numbers since new and is just dead stable...I get it most people don`t care about a few Hz...I do, and so do most of the wideband ESSB crowd.....You really can hear a few Hz at that wide of bandwidth, if there is more that what people consider "normal" low end presence it really sticks out when your ears are picky
I was just curious if there was a way to change it...i`ve lived with it this long so it is what it is..

I definitely care about accuracy and stability, hence my suggestion, which is the ultimate arrangement for both. Which is why I have not one but two GPSDOs

. But I can understand your point about "more stuff".

Your best bet might be to contact John Melton directly. I don't think he hangs out here.
Top

Scott
Yep E-mail sent to John, I`m just trying to cover all the bases and hitting it here also, One never knows who might be sitting in the background..LOL
The Version 2 with a RP4 and cooling fans just runs so stable I really haven`t even changed anything..
Used it last weekend and it reminded my old brain to See if there was solution...I truly wish I knew more about the coding aspect of this stuff..

w-u-2-o wrote:I realize this may not be the answer you want, but you might also consider buying a GPS disciplined 10MHz reference oscillator. Leo Bodnar makes a reasonably priced one. The 7000 will automatically use the signal. The 10E's will have to have their internal jumpers configured to use it.

Once you have one of these 10MHz references you never have to worry about it again.

Scott,
Is it possible to take the one output and feed two radios simultaneously, or should it be 1 unit per radio?
I have no experience with this.

Dan wrote:Scott,
Is it possible to take the one output and feed two radios simultaneously, or should it be 1 unit per radio?
I have no experience with this.

Depending on the GPSDO, you can split the signal to feed two radios with a 3dB hybrid splitter. See this post:

In fact, you may want to read that entire topic, which is entitled "GPSDO Tutorial"

As you can see from reading my posts in that thread, I had no problem driving two ANANs with the hybrid splitter. With a +13dBm input I had approx. +9dBm into each ANAN. But YMMV, depending on the GPSDO output level and the exact radios in question.

For more than two radios, or if you need a lot of drive for each radio, a distribution amp is required. If you search eBay for "10MHz distribution amplifier" you will find a number of quality, Chinese-built units for around $90.
Top

Just a Follow up
I answered My own question accidently
Swapping to a Pi 4b from a 3b was not as plug and play as it should have been, suffice to say I had to start from scratch OS wise
so also loaded the newest PiHpSDR
And there it is...Frequency calibration right there in the Radio setup menu.

I might add this is Version 2.0.8-rc1
Oh My God what a difference and some very nice updates.

If you see this John (G0ORX) and the rest involved, Thank You so much for a neat piece of software
I`ll use this a bit more now.

Sorry for the lousy pics I just snapped them off the controller with a phone.. 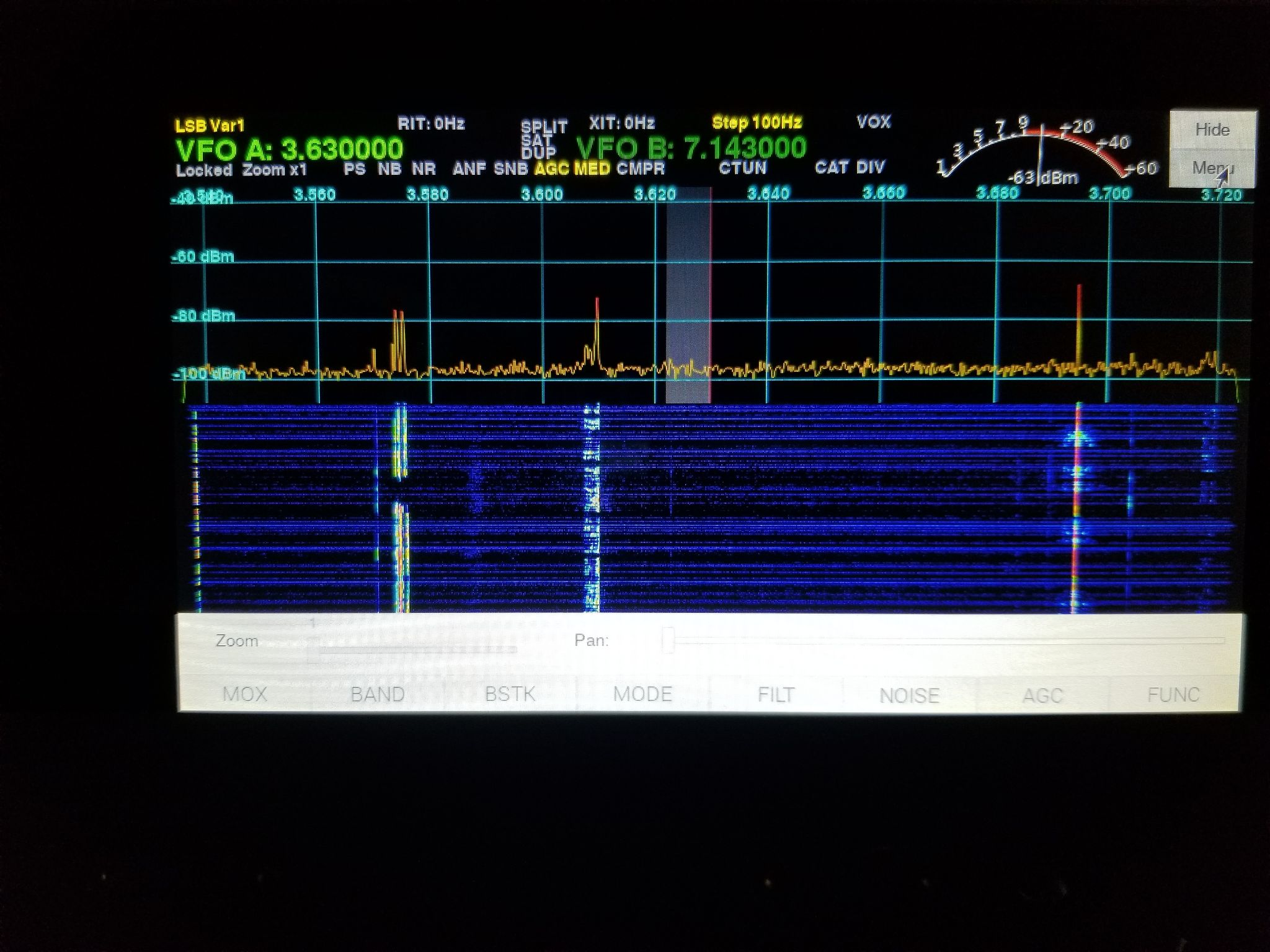 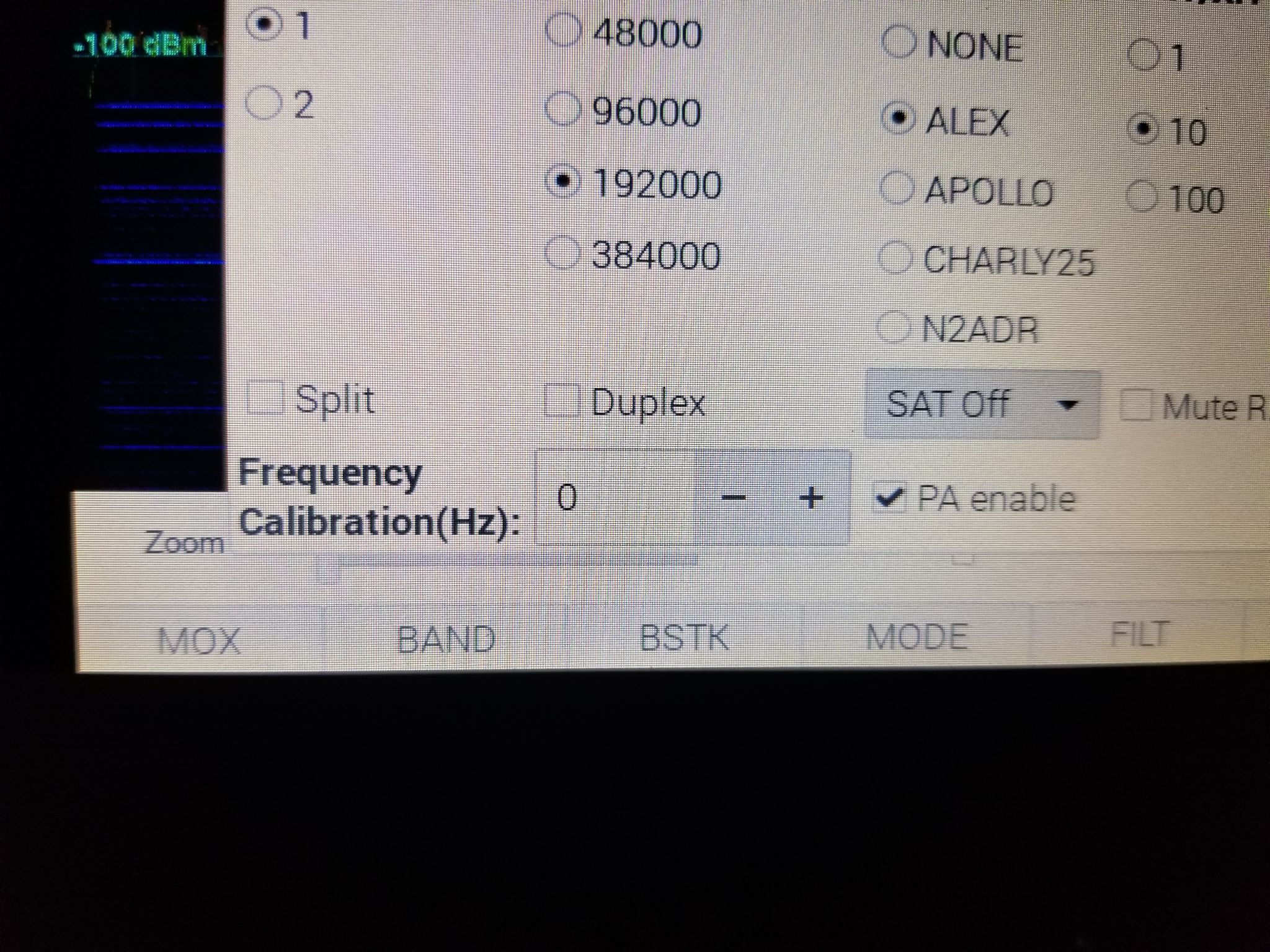 How old is your original controller?
Top

Scott
I built mine around the same time frame you did because I remember asking you where you got the angled base from so a few years ago....it was built on a Pi 3b
I put the version 2 Software on it a couple of years ago because that V1 software was just not the best....It was stable with the V2 stuff with 2.0.0 but pushing the limits of a Pi 3.
I needed to run the 7000 on it a while back to find some local noise (Everything on battery with mains shut off) well...with the 7K being on proto2 the Pi3B wasn`t going to work....Its 10/100 only.....so yesterday I stuck a 4b in it(Gigi Ethernet)..and the related mess that ensued with supposedly Raspberry Pi "Buster" being plug and play between the hardware platforms isn`t true..LOL.
While it is on Buster now..it took a complete "start from scratch" approach
If you haven`t tried the latest versions and have at least a 4 gig Pi4 laying around, Try it..Hell...Just the multi color panadpter with the pan and zoom is worth it..

plus, You probably have figured out i`m picky about audio...and zero glitches or wierdness so far and even at 8k bandwidth.
There are a few issues I need to deal with as far as the GPIO and my encoder switches not working but I delt with that going from V1 to V2 also so it`s minor in the big picture....This has been going on one of the 10E`s for about 24 hours and just flawless so far...It will be interesting to see if Pure SIgnal actually works on the 7000 with this....But that is a weekend project.

If anything wierd comes up i`ll update but so far so good..

Yeah, I gave up on using Pi's for anything that needed more than a tiny bit of horsepower. I have this version of piHPSDR installed on a Dell laptop built under Kali Linux just for grins. It runs much better than on a Pi. If you do decide to run it on a real linux machine with a full sized monitor there are some good ideas at this link for how to enlarge the display size.
Top

Scott
Thank You for that link....I know Christoph had done some work with it but for the life of me I couldn`t remember the his call
I will say this...on a Pi4 single receiver this has just been flawless...so far the best, most stable i`ve ever seen but i`m only running it on one of the 10E`s on proto1 so far.....too much going on to try it on P2 at the moment.
The only reason I keep using this is simply because of the package I take to my vacation property...10E and a pair of MRF300`s I built in a single case that operate of the 48 volt solar system up there...Its easy to transport and setup.
However...Since i`ve not been allowed to go up there for now 3 years because of the draconian covid restrictions....and it appears that isn`t going to change anytime soon...I may be selling it.....Makes me Ill thinking about it since i`ve been up there every year since I was 1 year old in 1962...this all may be for nothing..

I`ll give the linux a shot..I have a little Acer mini here that is collecting dust and would be perfect for that....